Written by Marlon Guerra (translated and edited by Dara Adams)

It was a dreary, rainy day and the team’s spirit was down after Zeus had mysteriously escaped from the trap the night prior. After seeing video after video of Zeus securely trapped, it seemed that he disappeared as if by magic, like the infamous illusionist Houdini. By afternoon, the rain had finally passed but the forest was wet and water droplets loudly fell from the canopy to the forest floor. We were making our afternoon rounds to check traps and I was heading to the traps on Aguajina trail where Zeus had escaped the previous night. I was feeling a little sad because I knew it was impossible that we would trap Zeus again, especially during the day time.

Megan, a volunteer at the station, asked if she could accompany me. As we came within 25 meters of the farthest trap on my route, we heard a noise. I started running toward the trap and as I approached I could see the door was bending at the safety latch. I couldn’t believe my eyes – Zeus was in the trap!!! I could see his head poking out from the bend in the door. How incredible, the force of this cat! I had nothing on me to secure the door but I spotted a huge branch nearby that had fallen from the heavy rains. I quickly grabbed the branch and placed it against the door. I started yelling for Megan, who had lagged behind. She was incredibly excited as she approached and realized Zeus was in the trap – it was her first time seeing a wild ocelot! I wasn’t able to move because the door latch was broken and I was determined to make sure the door was secured. I yelled at Megan to run back to the station to alert the team that there is an ocelot in the trap.

Marlon using a branch from a fallen tree to secure the trap door until the team arrived to help (still frame from a camera trap video).

Megan ran 3 kilometers back to the station and up a 250 meter steep, muddy embankment. I can only imagine the amazement and chaos back at the station as the team heard the news. Dara, Renata, Alice, and Alberto had to quickly grab everything needed and run 3 kilometers to the trap site. Meanwhile, I was still holding the branch against the door while the forest became dark and the mosquitos started biting. Zeus had calmed down with my presence and was no longer trying to escape. By the time the team arrived it was completely dark so Renata and Dara decided that it was unsafe to work and release Zeus in the middle of the night. But Dara was concerned Zeus might get hurt trying to escape from the trap in the middle of the night so it was decided that I would camp beside the trap to make sure he remained calm and safe.

I returned to the station to retrieve a tent, sleeping bag, and dinner while Alice, my wife, and Alberto stayed by the trap. I increased my walking speed as the sky was threatening rain. When I returned, Alice decided that she would stay with me and sleep next to Zeus. We put our tent six meters away to give him space but close enough so that we could make sure he was safe. We could occassionally hear Zeus growling but it seemed that our presence calmed him quite a bit. We certainly did not get much sleep but it was very cool to be able to hear and smell a wet cat all night! 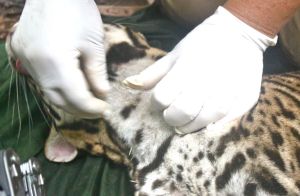 The team arrived with all the necessary equipment at daybreak so that we could anesthesize Zeus and fit him with a GPS collar. While Zeus had no injuries from the trapping, his neck was filled with porcupine quills! We had anticipated this because we had seen the quills on the camera traps the week prior but luckily they were much smaller than they appeared on the cameras and were easy to remove. Zeus had quite a few ticks and large botflys, which we removed, but overall he seemed to be in great health.

Later that day, after we released Zeus with his new GPS collar, we watched the camera trap video and saw that I had arrived to the trap less than one minute after Zeus had arrived. He must have been spooked when I came up behind him and ran right into the trap! In the end, it was Zeus’ over-confidence and a little bit of luck in timing that allowed us to finally capture this magnificent creature. 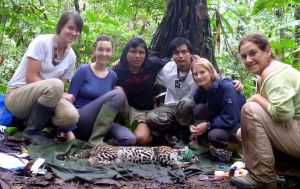 Overall it was an intense but amazing experience – thanks Zeus! 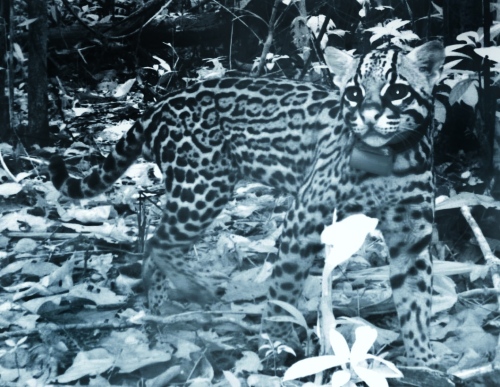 Zeus appears on a camera trap a few days after his release. Photo courtesy of Carlos Quispe, the Science Coordinator of Los Amigos Biological Station.