While we’ve had much exciting ocelot news to share, the majority of our time on the project is spent with the saki monkeys, locally called ‘huapos.’ We typically conduct day-long follows on our two behavioral groups for 10 to 15 days per month and spend the rest of the month locating and carrying out experiments on our four experimental monkey groups or collecting data on habitat variables (e.g., fruit availability, forest density, etc.) in the monkeys’ home ranges. Given that we follow the monkeys from the time they wake up until they go to sleep, we see a lot of interesting behaviors and events. Side note: Saki bedtime is quite early in the monkey world – they often enter their sleep tree around 2 or 2:30 in the afternoon, which is quite nice for us humans!

An infant saki resting on the back of its mother. Photo by Marlon Guerra

One such interesting behavior occurred about three weeks after the arrival of a new baby, “Zetsu,” in the Otorongo group (‘Otorongo’ is the local word for jaguar- the group is aptly named after the trail that runs directly through the middle of the sakis’ home range). Marlon and Alberto, local assistants working on the project, returned from the field one afternoon after a full day follow and told me that the adult male of the group had been harassing the infant all throughout the day. The male approached the female, who was carrying her newborn snuggly under her belly, and grabbed at the infant aggressively. The infant shrieked repeatedly until the female moved away. In the seven years I’ve been studying sakis at the field site, I have never seen seemingly aggressive behavior from an adult male toward an infant. My first thought was that perhaps the male was just curious and trying to inspect or carry the infant.

The following day, I went out with Marlon and Alberto and sure enough the adult male periodically approached the female and grabbed and pulled at her infant. At first she moved away but by the end of the day she quit turning away and refrained from trying to prevent the male from touching the infant. The behavior continued intermittently for several more days and we became quite familiar with the loud shrieks of this tiny new group member. By mid-month the behavior was becoming more frequent but we had to stop following the group to collect monthly habitat data. It is impossible to say what the male’s intentions were but the behavior appeared to be more aggressive than curious.

Vigilant male from the Otorongo group scans the horizon. Photo by Marlon Guerra

By the time we returned to collecting behavioral data on the Otorongo group the following month, the infant had grown quite a bit and had migrated onto its mother’s back. It frequently reached out and grasped at branches or other nearby objects and the male’s interest in the infant seemed to have lessened. We left the Otorongo group at the end of the month and started following the Yungunturo group (named after trail Yungunturo, which is the local name for the Priodontes, or giant armadillo). We were pleasantly surprised to see that the Yungunturo group had also recently welcomed a new group member. We were eager to get back to the Otorongo group later in the month to see how much their infant had grown. To our shock, the infant, which would now be around three months old, was nowhere in sight. Instead, we were greeted by a brand new infant that could not have been more than a few days old securely tucked into the underside of a different adult female.

The team was a bit saddened by the disappearance of Zetsu, as we had been documenting its development and were quite fond of the little one. Each person had his or her own ideas as to what happened – everything from infanticide (intentional killing) by the male to perhaps a lethal fall from the canopy. While infanticide is documented in a number of primate species, such as langurs and howler monkeys, it is extremely rare among ‘socially monogamous’ or pair bonded primates and it has never been documented in saki monkeys. Thus, it is unlikely that this was the fate of the little one; however, it is also rare for multiple births to be documented so close in time in one saki group.

On the other hand, we have witnessed quite a few close calls with infants and juveniles falling from the canopy. For example, back in September I was following the Yungunturo group one day when the adult female descended to the ground to feed on army ants. Saki monkeys at the field site love to feed on army ants and will often spend upwards of one hour or more on the ground preferentially selecting the soldier ants from the steady stream of ants to feed on. While the female saki was feeding on ants, the adult male of the group rested nearby and the juvenile male decided to make Rufo, one of my assistants, and I his playmates! The juvenile started swinging down low in the trees towards us, batting his hands at us, and emitting gleeful grunts. He became so carried away at one point that he fell about 10 meters and managed to grasp onto a sapling at the last minute, which prevented him from hitting the ground. He emitted one short shriek and eye-balled us like we were responsible for his fall. 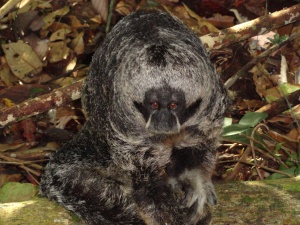 Adult female forages for ants on the ground. Photo by Dara Adams

A few months later we were following the Otorongo group and taking data while the group was feeding in the crown of an emergent tree. The infant was just starting to move around independently, occasionally leaving its mother’s back to explore. Out of nowhere we saw the infant free falling in the canopy from about 30 meters up. I emitted a high-pitched cry because I was certain the infant was going to hit the ground – and from that height – I couldn’t imagine it would survive. But somehow the infant managed to grab onto a small branch with one hand just 10 meters from the ground. The infant sat there in a stunned state while the rest of the group jumped down in the canopy toward it. The female quickly grabbed the infant and placed it on her back where it remained safely for the remainder of the day.

The adult male exhibited the same seemingly aggressive behavior toward the new infant in the first few months, albeit less frequently. The newer infant is now about seven months old and has started to venture off its mothers back to forage and explore. The male has taken a new but much friendlier interest in the infant. They frequently play or rest together and occasionally the male carries the infant for short periods. We look forward to the next few months as we continue to document the infants growth and development!