We are on the third month of field research for the year and we are off to an interesting and productive start. There have been a number of exciting events that have occurred, everything from raptors predating on monkeys to new babies in our focal groups! This post is a brief summary to highlight our major accomplishments and exciting moments since the field season started in May. 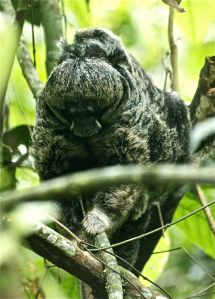 Mother forages for army ants with infant on her back

Over the past three months we have received eight volunteer research assistants and trained three local assistants. Those assisting on saki behavioral follows helped collect over 200 hours of group scan data on three different saki monkey groups. During this time, assistants witnessed several intense alarm calling bouts at potential terrestrial and aerial predators, a few hour-long territorial bouts between two of our focal groups, and the arrival of a new baby saki (who was given the name Zetsu by popular vote). In addition to these exciting events, we also lost an adult saki in one of our experimental groups to a predation event by a black-and-white Hawk-eagle (Spizaetus melanoleucus). The loss of an adult in a group is significant since sakis at our field site typically live in small family groups. This particular group only had four individuals prior to the predation event so we are eager to observe group dynamics in the coming weeks. 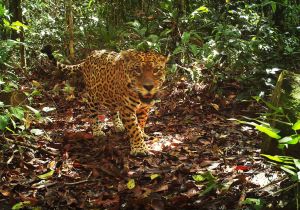 Camera trap photo of a male Jaguar (Panthera onca) taken at 10:30 in the morning

We have also made great progress in the predator monitoring portion of the project. Our camera trap data indicate a high density of felids in the area. A preliminary analysis of the data shows there are at least three different jaguars (identified from over 40 jaguar photos) – one young male that recently suffered serious injuries including a broken tail, a large male that is seemingly replacing the young male in his range, and a female with cataracts. We have also been following a pregnant puma for two months and we finally caught her new cubs on video! One of our volunteers, KC, called dibs on their names prior to their birth and he affectionately named them “Bebop” and “Rocksteady.” In sum, we have collected 109 independent cat sightings via camera traps, 5 sightings in real-time by human observers, 60 cat tracks (e.g. prints), and 14 scat samples. Our predator monitoring team has been quite busy with data entry!! 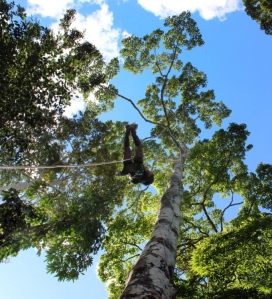 René Escudero climbing a tree to look for raptor nests

Aside from monitoring felids, we are also collecting data on raptor movement and activity and attempting to locate raptor nests near our saki monkey groups’ home ranges. We have been fortunate to have the assistance of Sean Williams, a Ph.D. candidate at Michigan State University. Sean is an expert ornithologist who has been at the field site conducting his dissertation research on space use patterns in mixed-species flocks. With Sean’s assistance, we have collected multiple observations on a pair of adult harpy eagles and several ornate hawk eagles (in addition to several other raptor species). We have identified a few probable nest locations based on these observations and we are now actively searching for nests with the help of René Escudero, one of our local assistants who is a raptor/tree-climbing expert. René’s strategy is to find the tallest emergent tree in pre-identified areas, ascend the tree with his nifty tree-climbing gear, and search for nests from the ‘bird’s eye view’ of the canopy (video of his amazing tree climbing skills forthcoming!). 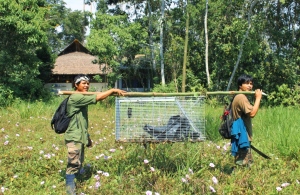 Perhaps most importantly this field season, we have learned how to trap an ocelot! We received two wildlife vets (one in May and one in July) to assist with trapping small cats so that we can place radio collars on them to monitor their movement and activity in relation to saki monkey movement and behavior. We have tried numerous strategies to attract cats to our traps, including the use of playback speakers that broadcast prey distress sounds (e.g. calls from rodents, rabbits, and birds), bait (e.g. tuna and sardines), and commercial scent lures. 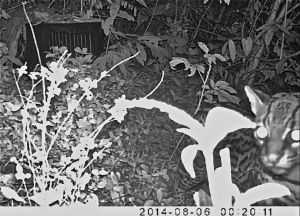 Chaska pays a visit to a trap site (trap in background)

Unfortunately we have not had much luck with these attractants until about three weeks ago when we discovered the wonders of chicken. The smell of chicken used in conjunction with a predator caller (manufactured by Edge by Expedite) that broadcasts chick vocalizations has brought in a female ocelot that has now been visiting three of our traps frequently with great curiosity. We named the ocelot Chaska, which means ‘star’ in Quechua. A wildlife vet from Lima is set to arrive this week and we are confident we can capture her and get a collar on her soon.
We have also had time for some fun in addition to all the hard work. During days off, our team has been able to climb the 60-meter (or 200-foot) observation tower to watch the macaws flying below as the sun rises/sets over the jungle. Quite a few of us have been lucky enough to see the 20-foot anaconda, Eleanor, who resides in Pozo Don Pedro, a blackwater swamp near camp. We’ve also been able to take a trip up the Los Amigos River to visit mammal clay licks and observe turtle nests filled with eggs on the beaches. We’ve had a number of other up-close encounters with rare and exciting animals, including a male tapir that walks with a limp, a family of giant river otters (an endangered species) that live in an oxbow lake near camp, a kinkajou sighting, a female anteater that resides near camp, a giant armadillo (who also hangs around camp), and caiman fighting in the river, just to name a few! Overall, we have had a productive and action-packed past three months. Check back for more on our research and adventures soon! 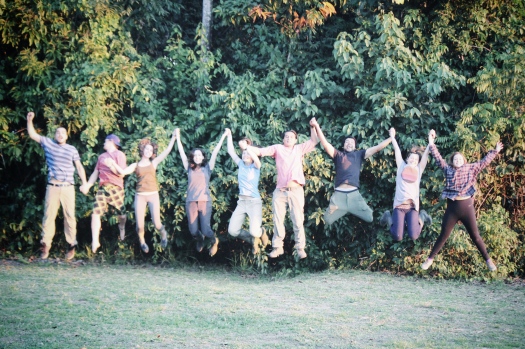