Titis alarm calling during an experiment. Photo by Denise Peterson.

How does a monkey react to an ocelot prowling beneath its tree, or to an eagle circling above? Observing monkeys in the presence of predators is a great way to learn more about their anti-predator strategies. However, we can’t count on stumbling across these rare predator-prey interactions in the forest to observe them firsthand. So, we are conducting field experiments through which we present saki and titi monkeys with realistic models of three predator types – ocelot, harpy eagle, and boa constrictor – and document their responses.

When the team heads out to conduct these experiments, we need a few things in our bag of monkey tricks: a predator model to present to the monkeys, a camouflaged sheet to cover the model until just the right time to reveal the predator, an audio recorder to capture the monkeys’ vocalizations, and, perhaps most importantly, patience! Coming across the perfect conditions for these experiments can take some time. First, we have to find the monkeys. They can be elusive! Then, we follow the monkeys until they are low in the canopy in an area without too much undergrowth. If there is a lot of vegetation between the monkeys and where we place the predator model, or if the monkeys are high in the canopy and the predator model is near the ground, they won’t be able to see it. And of course, once we have the monkeys where we want them, we cross our fingers and hope it doesn’t rain. Eventually, the stars align and we are able to present the monkeys with a predator model, and our patience pays off. 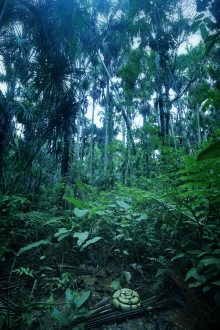 Boa decoy placed on the ground for a low risk experiment.

The monkeys show some surprising differences in their reactions to the different types of predator models. When presented with the boa constrictor model, one group of titi monkeys vocalized quietly before quickly retreating. When presented with the ocelot model, another group of titi monkeys immediately climbed higher in the canopy and vocalized loudly. The group members spread out into a few different trees around the model and continued to vocalize loudly for almost an hour. It was clear that each member of the group saw the ocelot model and was aware of the potential threat. So, why would the monkeys continue to vocalize for so long before retreating? These prolonged calls may communicate to cat predators, which rely on sneaking up on their prey, that they have been spotted. In other words, the monkeys may be communicating to the cat that the jig is up. If a cat knows its prey is aware of its presence, it may give up the hunt sooner, which would certainly benefit the monkeys.

Ocelot decoy on the ground during a ‘low’ risk experiment.

What I find even more interesting is that the monkeys respond differently based on the predator model’s location. When we presented titi monkeys with a harpy eagle model perched on a branch about two meters off the ground, the group reacted quite strongly. The adult male and female vocalized loudly for almost half an hour before the adult female and the juvenile retreated. The adult male hung back for another 20 minutes, hiding in thick vegetation and keeping an eye on the harpy model before finally retreating. When we presented another group of titis with a harpy eagle model on the ground, the monkeys’ response was relatively mild. They dared to come a bit closer to the model, briefly emitted some quiet vocalizations, traveled directly above the model, and then settled into a fruit tree not even 10 meters away to enjoy an afternoon snack. It seems the monkeys perceive a harpy eagle a few meters in the air to be a greater threat than a harpy eagle on the ground. Harpy eagles hunt in the canopy of the forest, flying from branch to branch as opposed to soaring above the trees, so the monkeys’ reaction to the harpy model perched on a branch is certainly warranted! 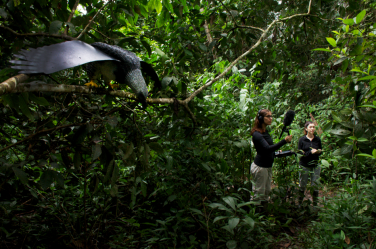 Conducting these predator experiments has by far been my favorite aspect of the research project so far. With just a little patience (okay, A LOT of patience), we are able to replicate predator-prey encounters that very few people have the opportunity to witness in the wild.